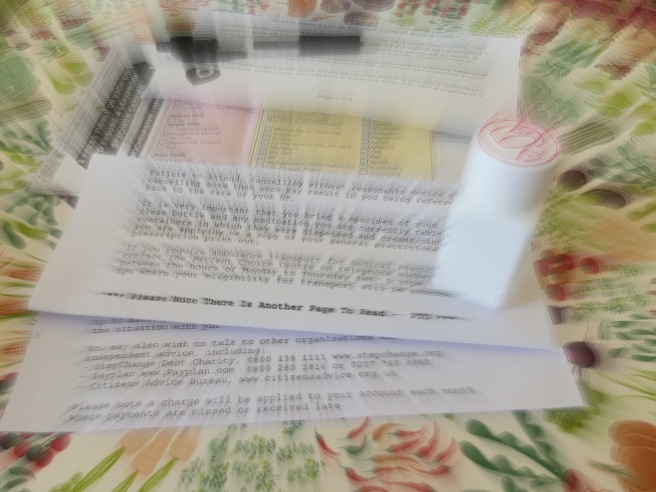 A poem about living with disability or illness

She lies awake at night,
eyes wired,
frantically reading
anything, anything,
to not think about it,
to patch up the cracks,
sew up the seams,
stuff the holes with cushions
made of trash TV and Facebook,
while the mould seeps
down the bedroom wall,
letters lie ignored
re: default sum unpaid,
again.
So sick, sick
of hospital appointments,
waiting in the waiting rooms,
waiting at the bus stop,
waiting for results,
waiting for the pain to stop,
waiting for her real life to start…

Now let’s talk about something that’s uncomfortable. I’m not going to apologise for being somewhat graphic because this is important. I don’t have any objection to pornography in theory. I don’t see anything wrong in sharing one of the great pleasures in life. Unlike a lot of women, I’ll admit to having watched it. I have particular tastes. Now some of that is down to personal taste, but most of it is about values. I don’t like abuse or incest. Recently there was an article in the Guardian by Gail Dines about the trend for women being ‘choked’ in pornography. Now if you take a look at what’s trending on Pornhub, it makes for quite eye-popping reading, yet these videos have been viewed by millions. You would think ‘taste my farts’, ‘real dad fucks his daughter’, ‘brother and sister fuck’, ‘painful fuck and pisses in her mouth’ would be a bit of a niche market, but no, these are some of the top viewed videos that come up on the first pages of porn sites. There are even videos of women abusing themselves. Fancy watching a woman shove her hand down her throat and vomit for you, whilst being fucked up the ass by a sex machine? No problem.

Pornography is often the first view of sex that teenagers experience, more so now in the age of the internet. This is the first impression of what adults are up to behind closed doors. Now am I alone in thinking wtf? We need to talk about this with them, because sooner or later they are going to see it. Even if this sort of shit is not your cup of tea, finding respectful, consenting, non-violent sex on a porn site takes a bit of a search, seeing some disturbing sights along the way. Not all videos state in the title that they contain abuse. A policy of ‘just say no’ is all very well, but let’s be realistic, kids are going to get curious at some point. Come on, admit it, we all have. So it’s important that we have that discussion with them, whether or not it’s uncomfortable. It’s a sad fact of modern life that we have to have a conversation with our teenagers about the violence in pornography. We need to warn them about it. We need to make it clear that this does not reflect what they should expect from a real life relationship. I was going to say it does not reflect what happens in real life but then I paused. Why are millions of people turned on by abusive porn? What happens in these videos is not pretend. Women are really being choked, slapped and treated like objects. People really are being held down with their noses pinched shut while someone pisses in their mouth. You can’t unsee that once you’ve seen it. Hopefully the ‘dad and daughter fuck’ is not really that, but the age difference is real. How old are some of those girls? ‘Teenage girls’ and ‘college girls’ are probably the most prevalent titles for videos, some of them clearly in school uniforms, judging by the thumbnails. I would never click on a video with a title like that. Let’s hope they are over 18. Of course you could make the argument that people indulge fantasies they would never act out in real life. Gods, I hope that is the case. Nevertheless it is worrying. Is this what is in the heads of millions of people? Why?

Now I’m not a regular viewer of pornography, but I have seen it on and off over the course of my adult life, and I can see a disturbing change in the tone of what’s popular. There has always been an uncomfortable focus on the pleasure of men and the subservient performance of women. Then there seemed to be a growing trend for women showing that they wanted pleasure, expecting it and getting it. I thought there was some hope on the horizon. Recently the emphasis has turned to playing at incest and various types of abusive acts. Is this part of the #metoo backlash? One paragraph in the aforementioned Guardian article stands out for me,

This is the greatest danger of pornography as it is currently. Not that we will all become promiscuous or sex maniacs. It’s not that sex is ‘dirty’ or even any moral argument that it should take place within a loving relationship. It’s the most basic human values that are being eroded. Respect. Consent. Not hurting people. And this comes down to one word. Objectification. When people are treated like objects, everyone loses their humanity.

We need to stop blushing and talk about it.

Here in the UK we celebrate Mother’s Day in March. However I’ve been moved by all the tributes to Mothers this weekend for Mother’s Day in the US and Australia. There can’t be too many days to celebrate loved ones. We don’t know how much time we have together.

I’ve just written a new poem. I think this will work best as spoken word. It’s another one in my series about sexual violence. I know this a heavy subject, and some of my poems are quite graphic, but it’s important for people to understand the reality. Because rape culture is a reality. Because sometimes guys deceive themselves about consent. Because people judge women for submitting. Society seems confused about consent. It’s important to understand that violence is not always overt and visible. The only way to change this is to face it, to talk about consent, for everyone to think about it. Survivors are carrying the weight of this. It’s a spectrum of abuse. A key indicator is fear. If someone complies out of fear, it’s not really consent. There is also the issue of normalization of behaviours, which feel uncomfortable for someone on the receiving end, but they are taught to suppress and disregard those feelings. Fear is still there but it is very subtle. Minimising or dismissing someone else’s concerns are a sign of not respecting their right to free choice. People may learn to internalize that and minimise and distrust their own feelings. Everyone needs to take a look at themselves and how they relate because denial is a powerful force. It’s hard to talk about, but it’s time to speak the unspeakable.

Links to my other websites

Find me on social media